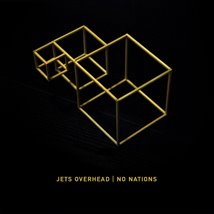 Jets Overhead‘s No Nations answers the rhetorical question: what would Coldplay sound like with an additional female vocalist and a rock sensibility?

That’s an oversimplification, of course. Hypnotic beats and a heavier bottom end are key components of the Jets Overhead sound. Classic keyboards of the 1970s are used extensively on the album: Rhodes, Wurlitzer and the extremely rare ARP Solina all feature prominently in the song arrangements.

“Heading for Nowhere” evokes the more tuneful and creative end of 80s pop; the blending of male and female vocals makes the tune more than it would otherwise be; the backing vocals provide a solid hook. Like most of the songs on No Nations, it’s midtempo rock-pop.

The simple melody of “Weathervanes (In the Way)” carries the album’s greatest hit potential. It’s also the song most likely to be mistaken for Coldplay. But let’s not hold that against the band: they’re not consciously aping Chris Martin and company. This sparsely-arranged tune is a delicate thing of beauty, worthy of consideration on its own merits.

The moody, minor-key “No Nations” may remind listeners (of a certain age) of Echo and the Bunnymen, The Cure, and maybe even the Psychedelic Furs. The electronic handclaps are a nod to that era, but the electric piano adds a timeless element, and the stirring chorus effectively builds the song’s dramatic approach.

Most of the songs on No Nations are of the four-minutes-and-out variety. The band has a good sense of how to make its musical points: quickly, assertively, and then move on.

The dreamy “Time Will Remember” avoids being just another plaintive meditation through use of distortion; the overdriven instruments evoke the Velvet Underground, of all things.

“Fully Shed” takes a more direct approach, and comes the closest to rocking out; it’s a head-nodding track. And its final two minutes head in the direction of a jam; this song sounds like it would do well as a live encore number.

The quintet from Victoria, British Columbia makes good use of their vocal landscape on “Always a First Time.” Female vocals take high harmonies, and occasionally go a full octave about the male lead vocal. The technique is a hallmark of the group’s sound, but it’s employed judiciously.

Droning Indian instruments lead into a synthesizer wash and a gritty bass figure on the album’s closer, “Tired of the Comfort.” One use of a final album track is to point the way to the musical future. There’s no way to know if that’s what’s being done here, but the slowly unfolding track develops into a song that makes effective use of all of Jets Overhead’s strengths: moody atmospherics, deft and subtle arrangement, unexpected chord shift, repeating hooks. It also, finally, really rocks. Too sprawling to lead off an album, “Tied of the Comfort” instead neatly sums it up.

While interested listeners wait for that follow-up to hear where Jets Overhead go next, the group’s first album (one that used the “give it away online and let people pay what they like” method more than a year before Radiohead‘s In Rainbows) and a couple of EPs are also available.