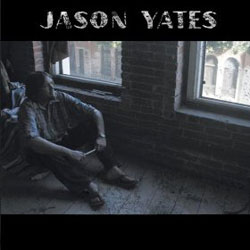 The first three notes on Jason Yates‘ new self-titled album sound like the opening of Squeeze‘s “Black Coffee in Bed”. But that’s not at all the direction in which Yates goes. On this keyboard-led album Jason Yates covers territory that will be pleasantly familiar to fans of The Band, Randy Newman, Van Morrison and other iconic artists.

Yates is note-perfect in his use of timeless keyboard instruments. Acoustic piano, tack piano, Wurlitzer, Rhodes, Hammond; he plays them all and exhibits a keen understanding of the nuances of each instrument; they’re more than punched-up samples; they’re different instruments, each designed to be played in its own manner. Though he’s clearly an excellent musician, he resists the temptation to overplay — no Lee Michaels is he — and his songs are all the better for it.

“Comin’ On Back” kicks off sounding a lot like Neil Young and Crazy Horse; stuttering distorted guitar and a plodding beat make the song sound like an outtake from Tonight’s the Night. But where Crazy Horse would have kicked things into a long solo, Yates ends the tune and moves on.

The countrified “Paper Tents” is an upbeat number in the style of The Band, with hints of Jackson Browne. “To Reason” puts a Wurlitzer electric piano out front of a shuffling tune; Yates’ nimble playing on the vintage keyboard makes the tune an album highlight; the understated solo is a delight.

In fact, “To Reason” displays a neat trick that Yates manages throughout the album: he’s able to layer multiple keyboard instruments (in this instance, Wurlitzer, acoustic piano and organ) while somehow avoiding the feeling of a keyboard-dominated record. He’s sure enough of his songwriting and arrangement skills that — apparently — he doesn’t feel the need to hit listeners over the head with keyboards.

“To Chance” builds a track atop a gospel piano and organ arrangement that will please fans of, say, Billy Preston. The presence of a female vocal chorus only furthers the effect.

As it turns out, Yates has quite a reputation as a player’s player. A member of Ben Harper‘s band, he’s played on sessions for Macy Gray, Taj Mahal, Toots & the Maytals and many others. On this, his second solo album, he stakes out musical territory and claims it as his own.

If there’s any element of Yates’ album that’s unsatisfying, it’s the disc’s brevity. Nine songs — none of them long — and it’s over. But as a working example of the leave-’em-wanting-more philosophy, Jason Yates is nothing short of a success.