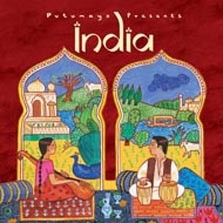 The holiday gift giving season — or at least the shopping run-up — is nigh upon us. So if your plans include “giving the gift of music” as the old National Association of Record Marketers slogan suggested, it’s time to start thinking about what to buy.

The Putumayo label is dedicated to world music and other slightly outside the mainstream genres. Their products are available online in all the usual places, but they also market their products slightly different manner; chances are good you’ve seen a point of purchase display in a gift shop or boutique. In some ways, they’re positioning their releases in competition with other gift items rather than other music selections.

That seems like a smart strategy. The label’s top-selling 2009 release, Putumayo Presents India, is a ten-track sampler that surveys the current popular music of the huge Indian market. Ten tracks cover a wide array of styles, though all are firmly rooted in Indian culture. Some tracks betray a Western influence; others, not so much.

From a musical standpoint, “Zara Zara” by Bombay Jayshiri would be an ideal theme song to a Bollywood remake of James Cameron’s Titanic. “Naino Sey” features jazzy electric guitar and fretless bass, but the male vocal keeps the tune from falling completely into the smooth-jazz category. Satish Vayas‘ “Homeward Journey” (ironically, the only English-titled song on the set) is in fact the most “Indian” sounding track on the set. Listeners expecting tracks that evoke memories of Ravi Shankar at George Harrison‘s Concert for Bangla Desh will be surprised; this music leans more in a contemporary pop direction. One imagines that many of these artists would fall into India’s’ version of AAA format, assuming such a thing exists.

The sleeve describes the music contained therein as “captivating musical masala featuring mesmerizing vocals and gentle beats,” and that pretty much nails it. There are no super-high energy Bollywood dance numbers here. The music on India is designed to be right on the edge of challenging: play it in the background, enjoy it. It’s nice. Don’t care to think about it too much? No problem. Let it play; nothing offensive will assail your ears. But Putumayo tries to have it both ways (or, more accurately, to give it both ways). The extensive liner notes place each song in context, providing information (in three languages, no less!) about the artist, musical style, lyrical subject matter and more. Like most of the label’s offerings, Putumayo Presents India‘s packaging is exceptional. The label surely provides value for the gift-giving dollar.

A helpful glossary further defines some of the musical terms used in the booklet. And if Putumayo Presents India really gets the listener in the mood, the booklet kindly provides a recipe — no, I am not kidding — for Zarda Pulao — Sweet Saffron Pilaf with Nuts and Currants.

So if you’re looking for something just a little different, but not too edgy, for a holiday gift, Putumayo Presents India is worthy of consideration.