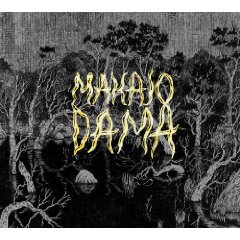 Progressive rock is an acquired taste; interest in (and appreciation of) improvisational music, even more so.

It was with that in mind that I approached my first listen to the new self-titled album by Sweden’s Makajodama. The one-sheet helpfully clued me in ahead of time, so I was prepared for instrumental prog with hints of improvisation. Imagine my surprise, then, when the first track, “Redorfelgen Blues” kicked in. What? A twangy guitar and an almost-funky riff? Not at all what was expected. Then, a few seconds into the tune, a sawing violin added to the mix, creating some bizarre child of Larks Tongues in Aspic King Crimson and, I dunno…Creedence Clearwater Revival? Then it shifted again, into Crimson’s Red territory. Then the band locked into a one-chord jam. On it went, navigating sharp musical turns every minute or so. Leslie’d guitar leads that sound like something coming out of Apple Studios in January 1969, then USA-era Crimson with violins, then something a bit like Russian Circles, then more Red-era King Crimson. Yeah, that’s prog for ya. All over the map, never staying in one place too long.

But the changes, somehow, don’t seem gratuitous. While the sections (hell, let’s go ahead, be a bit pretentious and call them movements) never loop back upon themselves — this music is always moving forward — it has the feel of well thought out arrangements.

And don’t get the idea that Makajodama is a bunch of Crimson acolytes. The second track, “Buddha and the Camel” has a pastoral feel somewhere between Obscured by Clouds era Pink Floyd and Nick Drake; it’s a beautiful tune with a haunting melody. Violin and flute trade licks tastefully. Then, around the six-minute mark — by this point the listener expects the unexpected — a wah-wah guitar kicks in, almost as if some rocker horned in on the lovely acoustic circle. But the guitar blends seamlessly, taking what was already a good song and transmitting it onto a higher plane. By the end of the song, string synth is competing for attention with the electric guitar, violin and flute, and everybody wins.

The pastoral theme is taken almost a bit too literally on the brief “Wolof”: the track features tweeting birds atop an acoustic guitar riff that lovers of Led Zeppelin III will enjoy.

The classically influenced chamber pop of “The Train of Thought” puts the violin out front; it’s just loose-limbed enough, with suitably rough edges, to lean a bit in the “fiddle” direction. The rhythm section plays Crimson on this one again. Like most of the songs on Makajodama, this soaring song builds to a crescendo; and like the best instrumental music, it conveys just enough emotion, leaving enough mystery for the listener to project whatever they wish upon it. An unexpected pedal steel guitar is present on the track, and — like pretty much any instrument the band throws at a tune — it fits well within the framework.

“The Ayurvedic Soap” heads into unnerving off-kilter musical depths. This one will be enjoyed by prog fans, but more pop-centric listeners (the ones who liked “Wolof”) might be put off by the tune’s weird, herky-jerky arrangement. This tune comes closest to an improvisational spirit, for better or worse. And as expected it builds to a musical maelstrom.

“Vallingby Revisited” is led by a jazzy guitar and fiddle duel; it’s all but inconceivable that this tune was improvised; it’s far too intricately arranged for that. And despite its weird meter, it’s a foot-tapper, a head-nodder. And the unexpected instrument du jour in this case is a tenor saxophone. This is almost jazz.

“The Girls at the Marches” builds out of nothing, a bit like Godspeed You! Black Emperor or Glenn Branca. Whammy-bar electric guitar exudes a placid, underwater vibe. Eventually the song finds itself chugging along, but long before its end, it fades back into minimalism. It’s almost a soundtrack in search of a film.

Makajodama saves the best for last. “Autumn Suite” starts off with eerie violin overdubs that give way to a memorable line evoking parts of another suite, Pink Floyd’s Atom Heart Mother. A mere two minutes in and the listener might figure the song’s said all it wishes to. But no: hints of early 70s Zappa compete with the atonal squawks of In the Wake of Poseidon. Then the song settles into a doomy organ-and-bass led meditation. Just when you think it’s all over, a sitar joins the fun.

On paper this project might all sound like a grab-bag. But on hearing, you’ll learn it’s nothing of the sort. Deftly straddling that line between exploration and accessibility, Makajodama is well worth checking out, and repeated listens will reap additional rewards.