NOTE: In 2009 Noble Rot reissued three of Julian Lennon‘s albums. They didn’t reissue the Valotte debut, nor did they put out a new release of Photograph Smile, Julian’s 1999 album (and arguably the finest work he’s produced). Instead, this new label — in keeping with its reputation for unearthing underappreciated albums from the ’80s and ’90s such as those by Toy Matinee and Marc Bonilla — released digipack versions of The Secret Value of Daydreaming (1986), Mr. Jordan (1989) and 1991’s Help Yourself. Here’s the second in a series of five reviews. 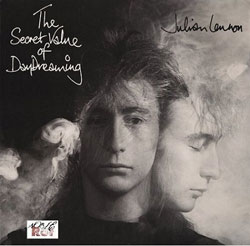 For The Secret Value of Daydreaming, Julian Lennon reunited with Valotte producer Phil Ramone (Billy Joel). And Lennon’s friends, co-writers and bandmates Justin Clayton (guitar) and Carmine Rojas (bass) were along as well. But the Muscle Shoals contingent that was such an integral part of the Valotte sound wasn’t part of the project. Their beefiness, their punch…it’s missed here. The songs are sturdy compositions, but overall the album has a dreamy, plaintive feel. There are some stabs at genre-hopping: a bit of reggae beat here, some programmed beats and now-very-dated keyboard sounds there, but the record never really gets going. “This is My Day” is the closest thing to a rock number on the album.

And while it’s perhaps expecting too much for Julian to have developed a distinct musical personality by his second album, the overall feel of Daydreaming is a bit on the generic side. To be fair, “generic” was a hallmark of many sophomore albums of the era. What now sounds horribly dated was fresh and new in 1986 (think of Phil Collins‘ gated reverb drums; you’d get slapped if you tried to put that sound on a record nowadays, and with good reason.) So let’s forgive Julian for all the DX7 preprogrammed sounds (and the fretless bass on “You Don’t Have to Tell Me”). Listeners who, er, stick around for the final track will be rewarded. Despite its slightly creepy title, “Want Your Body” is a lovely piano ballad, and is, along with the opening track (and single) “Stick Around,” a high point of the album.

Not an awful record, The Secret Value of Daydreaming is merely a slightly forgettable one. Lennon could (and eventually would) do better. As is standard on Noble Rot releases, there are no bonus tracks on the CD. The brief liner notes add little, and the original LP liner notes (who played what, etc.) are nowhere to be found.

Coming next in this series: a review of Lennon’s Mr. Jordan, reissued in 2009.