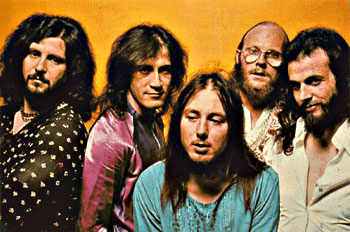 UK-based Gentle Giant was one of the most consistently fascinating progressive rock groups of the 1970s.  Like — but not part of — the Canterbury Scene (Soft Machine, Caravan et. al.) Gentle Giant managed to combine compelling arrangements and tricky time signatures with whimsy and humor. And they brought an English folk orientation that put them in a rarefied league alongside legendary groups such as Fairport Convention and Jethro Tull.

Like many of their contemporaries, they suffered commercially at the hands of new wave etc. and folded their tent in 1980. My own exposure to the group came rather late; I picked up vinyl copies of the stunning 1975 Free Hand LP and the live set Playing the Fool (titled after a Gentle Giant bootleg of the same name!) right around the time of the group’s breakup.

Now comes the news that Gentle Giant’s catalog (more than a dozen albums) is being prepared for digital release. In conjunction with that effort, the band members are doing a “blog tour.” It works like this: send me (via email or comment) your questions for the band, and then I’ll schedule a time to pose the questions to them. And then I’ll keep the results all to myself…

No, of course I’ll post them here, perhaps with some audio of the interviews as well. Please specify as to which GG member your question(s) should be addressed: Kerry Minnear (multiple instruments), Ray Shulman (bass etc.), John Weathers (drums), Derek Shulman (vocals etc.). This is set to happen in November, which is…pretty soon. So get cracking. Me, I’ll be asking them a thing or two about “We Are the Moles” by, well, The Moles.