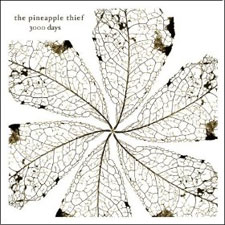 Maybe it’s something in the British water. Or, more likely, in their wonderfully full-bodied just-below-room-temperature beer. It must be said: this is pretty derivative stuff. The Pineapple Thief sounds like nothing so much as Porcupine Tree with Steven Wilson replaced by Radiohead‘s Thom Yorke (vocals) and Jonny Greenwood (guitar).

OK, perhaps that’s a bit unfair. Bruce Soord (the songwriter, vocalist and prime mover for UK-based The Pineapple Thief) writes songs that express his concerns, and he’s not especially mannered; he doesn’t — I don’t think — consciously ape these two fine bands. It’s just that he is undeniably influenced by them. Or, to be a tad more charitable, his influences parallel theirs.

And “derivative” isn’t necessarily a pejorative descriptor, not when I use it. Case in point: Oasis, The Verve and The Stone Roses (also all British) weren’t worlds apart musically, but all turned in excellent product.

All that said, this is quite enjoyable music that bears repeated listens. The 2CD set 3000 Days is a career-to-date summary covering seven albums and an EP, and spanning the previous decade. While The Pineapple Thief began as Soord’s solo studio project, a stable-lineup quartet now trades under the group name. The songs are often driven by acoustic guitar and various electronics, but make ample use of vocal harmonies, classical instrumentation, hard-edged electric guitar, skittering percussion, unusual time signatures and atmospheric arrangements.

Don’t get me wrong: I like this music and am glad to have discovered it. And I am more than likely to follow their progress and check out their next release of new material, whenever it comes out. But it’s undeniable fact that if you put 3000 Days on your CD player and then go about your business, you’re as likely as not to forget who you’re listening to, and might find yourself thinking you’re listening to outtakes from OK Computer or Deadwing.

Not that there’s anything wrong with that. My recommendation is this: if you like Radiohead and/or Porcupine Tree and are looking for something new in those veins to keep you satisfied until there are follow-ups for In Rainbows (not likely, says Thom Yorke) and The Incident (c’mon! that album came out a mere two weeks before The Pineapple Thief collection), then pick this up. You won’t be disappointed. If, however, you think Steven Wilson is pretentious and Thom Yorke is too whiny, then The Pineapple Thief might not be your bag.

Me, I like it. The Pineapple Thief produce song-based albums that are long on atmospherics while giving good value in the melody department.