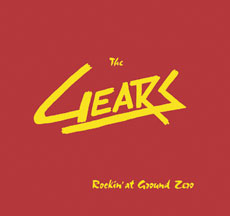 Initially I had reservations about even spinning my review copy of Rockin’ at Ground Zero. While I wasn’t familiar with The Gears, I do know enough about the L.A. punk scene of the late 70s and early 80s. And that era of punk doesn’t really do much for me. The L.A. variant seemed musically angrier and less melodic than stuff coming out of other locales (like NYC). Speed was king, and finesse mattered less. Eventually I popped the disc in, and was pleasantly surprised.

The first thing that struck me was the immediacy of the songs. The dry, almost effects-free production aesthetic presents The Gears in a manner that (I imagine) isn’t too far removed from their live set. Of course the needles aren’t all in the red, and the balance and mix are as they should be. But the energy’s all here.

“Baby Runaround” kicks off sound a bit like a slowed-down Ramones, but there’s — believe it or not — a subtlety to the playing. “Let’s Go to the Beach” updates surf music for the era, while providing a catchier take on that genre than, say, the Surf Punks. “Elks Lodge Blues” marries blues and punk in an effective method, turning in a performance that has as much in common with the tracks on Rhino’s Loud, Fast and Out of Control (an essential box set compilation of 50’s rock) as it does with, say, the Sex Pistols. Axxel G. Reese’s yelps are particularly effective, and the playing tighter than one might have a right to expect from L.A. punk scenesters.

Overall, the songs on Rockin’ at Ground Zero traffic in teenage rebellion and fun-at-the-beach themes rather than nihilistic, atavistic hardcore messages. And musically, the Gears manage the feat of providing variety while working solidly within the punk genre (something the Ramones decidedly did not do that same year: they recorded End of the Century with Phil Spector at the boards). The Gears weren’t adherents of the faster-is-better aesthetic so prevalent in L.A., and that’s ultimately to their credit. These tracks hold up well nearly thirty years later, and don’t really sound dated at all.

Well, except “Darlin’ Baby.” The song starts as a 50s throwback tune and then (ahem) shifts gears for the chorus into a pogo-worthy rocker. The presence of such dynamics throughout Rockin’ at Ground Zero makes listening to the album a rewarding experience; unlike some records of the era, the shifts in tone, style and delivery keep the listener on their toes, and sidestep the numbing attack of lesser punk acts. One guesses the Gears were an incendiary live act; hearing these songs, it’s impossible not to imagine a club full of pogoers. The Gears seemed to understand what was valuable about early rock and roll, and incorporated that into their then-modern songs. The spirits of Eddie Cochran, Gene Vincent…and Sid Vicious are breathed back to life on Rockin’ at Ground Zero.

Bonus tracks include the original 45s of “Let’s Go to the Beach” and “Don’t Be Afraid to Pogo.” Both versions are (naturally) rawer than their album counterparts, in both performance and production. Five demos from 1979 (in surprisingly good fidelity) show that the Gears’ approach was pretty fully developed before they entered the studio. The exception is “Heartbeat Baby”, which underwent a radical reinvention that improved the song exponentially. In the end, most the self-produced demos don’t sound that different from the polished versions. And that’s to the credit of Rockin’ at Ground Zero producer Gary Hirstius and all involved in that album.