Paste Magazine Got it Right. Sorta.

Paste Magazine has an online feature in which they go for the funny and gently mock themselves and their ilk. “The ’60s & ’70s Bands Rock Critics & Musicians Always Namecheck But That No One Else Really Ever Listens To 2009” lists those acts, and makes a half-hearted argument as to why they get mentioned so often, but doesn’t extend the argument much beyond “because they’re awesome and we can.” 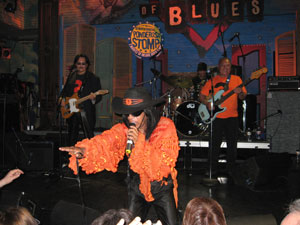 The truth is, those of us “in the know” recognize that these artists are/were truly special, and that they have each added something unique, something precious and rare, to music. We are frustrated with the fact that these musicians haven’t gotten what we feel is their commercial due. We look at the success of far lesser-talented acts and ask ourselves why the artists we champion didn’t get their slice of the pie.

I’m as guilty as anyone of flogging these acts. I discovered most of them many years ago, and given a choice, I’d more likely spin one of their LPs than something by the acts they influenced.

So here’s my (perhaps predictable) suggestion. Go read the Paste piece, chuckle at it, and then come back here and follow these links to learn more about these artists. Then go listen to their stuff. At that point, you too can be an honorary member of the Smug and Superior Music Critic Type Club, albeit one with unassailable good taste.

Big Star – early power pop with critical heft. I recently wrote a review of a repackaging of their first two albums. A comprehensive box set will be out shortly on Rhino.

The Faces. I discovered the post-Small Faces era stuff (with a pre-lameness Rod Stewart on vocals) when I bought a pile of used vinyl from a guy recently, and am working my way through the albums. I am mightily impressed; it’s more commercial than Rod’s work with the Jeff Beck Group, and way higher quality than Stewart’s solo material.

New York Dolls. I was fortunate to interview singer David Johansen for Skope Magazine right before the publisher had an argument with his (cough cough sole financier) grampa and pulled the plug on that magazine. So the feature never appeared in print, but it’s here.

Kraftwerk. I bought Autobahn when I was a kid. Kinda cool. A reissue project (covering several Kraftwerk albums) is due out very soon.

Moby Grape. The greatest band you’ve never heard. I’ve written about them a lot. Here’s one, and here’s another.

Captain Beefheart. OK, I’ll take a pass on this one. I bought Trout Mask Replica on vinyl about a quarter century ago, and while I have played it all the way through, I don’t really “get” it. I will not argue against anyone’s claim that Beefheart is great — the same way I wouldn’t argue that Don Giovanni is great opera — but please don’t make me listen to it. This stuff is more off-putting to the average listener than The Residents. Now they should be on this list! I’ve interviewed their spokesman.

The Small Faces. Very catchy mod British stuff. Like so many other greats, never caught on in the USA. But huge in England.

Shuggie Otis. I’m guilty of only having recently begun to listen to soul, funk etc. So I don’t know Otis’ stuff. UPDATE: Long since corrected that criminal oversight.

Mott the Hoople. Underrated 70s rock. “All the Way to Memphis” is a classic.

Esquivel. There was a mini-craze in the late 90s for what was dubbed Space Age Bachelor Pad Music. A band called Combustible Edison (on SubPop!) was pretty much the apotheosis of this genre revival attempt. Esquivel did it better, along with Martin Denny and a few others.

King Crimson. The standard by which all progressive rock must be judged. This group went through so many changes — supposedly (but not actually) humorless, true genius and guitarist Robert Fripp being the only constant — but any of the group’s dozen-plus styles could serve as a jumping-off point for development of a whole new subgenre. For me, it never got better than Red, but all of it is worthwhile. A whole set of remastered reissues is coming soon, and Porcupine Tree‘s Steven Wilson is heavily involved. Him, I’ve interviewed.

MC5. Not the DC5 (that’s Dave Clark!), these guys practically invented Detroit hard rock. And they serve as the polar opposite to the Neanderthal political stance of fellow Detroiter Ted Nugent. But, the music. I reviewed a strange DVD about them awhile back, but for newbies I recommend trying to track down the film MC5: A True Testimonial. View that and you’ll want to know and hear more.

Humble Pie. Proof that even though Frampton Comes Alive was so ubiquitous and overplayed that you couldn’t get 25 cents for a used vinyl copy, Frampton still had plenty of talent.

Other acts that should have made this list: Love, The Tubes,Kirsty MacColl, Sweet, The Pretty Things, and the aforementioned Residents.