Swedish multi-instrumentalist, composer and band leader Gustav Estjes describes the music of his band Dungen as “heavy, but soft as well.” While Dungen is unabashedly heavy, there remains great subtlety in the songs, conveyed through extensive use of flute, violin and keyboards. Dungen’s sound is a swirling mix, informed by psychedelic rock and European folk. Echoes of Axis: Bold As Love-era Hendrix can be heard in their compositions, as can the complexities of Miles Davis‘ Bitches Brew. Over the course of four (or five) albums, the group has refined its sound further, adding stronger elements of jazz, at the same time constructing more concise pop songs. 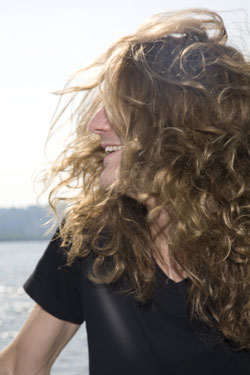 Formed in 1999, Dungen was originally Estjes as a one-man studio band. These days — especially since the release of 2007’s breakthrough Tio Bitar — Dungen (pronounced DOON-yen) is viewed more as a proper band. But it’s still unmistakably Estjes’ show.

“It’s a little bit complicated,” he says. “It’s my songs. I have been arranging, recording, producing the songs together with friends and musicians. And they have a huge impact on how the records sound. But at least in the recording process, I am…” he pauses, “a little bit of a control freak. I have a lot of finished ideas of how a song should sound, even before I start recording. So it’s no band in the traditional sense that we arrange the songs together. In the end,” Estjes says, “it’s my stuff.” There is certainly a strong precedent for this approach. Brian Wilson famously produced the Beach Boys‘ finest studio works (Pet Sounds, the unreleased SMiLE) in a studio using the Wrecking Crew sessioners, while the “real” Beach Boys toured without Wilson. And Trent Reznor created Nine Inch Nails albums working alone, only later assembling a touring band to perform the songs live. Estjes’ band members aren’t his puppets, though: “The songs have improvised parts that we rearrange for the live shows. That makes it interesting for us, and in those moments, we are definitely a band.”

Dungen’s latest album, 2008’s 4, is their most accessible yet. But don’t look for pearls of wisdom in the lyrics: As with all of Dungen’s music, the songs on 4 are sung in Swedish. “For me, the lyrics are personal. I work a lot on them,” Estjes says. “But it’s not that important that other people understand them. That’s the beautiful thing about music: Even if you don’t understand the words, you get a certain feeling anyway.”

When asked what is on his current personal playlist, Estjes names ’70s rocker J.D. Blackfoot and Chile’s Aguaturbia, the latter familiar only to psych-rock fetishists. Then he mentions his love for Italian opera. But he also reveals that there are many times when he finds himself “only listening to hip-hop.” His interest in those seemingly disparate corners of the musical landscape is as complex as Dungen album titles. The latest — and first easily pronounceable one (4) — is actually the fifth long player of Dungen music. “I just did that to piss you off,” Estjes laughs. He then explains that the compilation of early material titled 1999-2001 isn’t really considered part of the band’s “official” catalog.

Estjes gets as much fulfillment — though of a different sort — from live performance as he does in the recording studio. “When I make music in the studio, I’m really picky about sounds. It’s like a painting; the colors have to be exact. But live, you’ve got just one chance, one ‘take.’ There’s so much going on there. The audience is part of what’s happening as well.”

Aug. 18 marks Dungen’s third Asheville performance; Estjes considers the band’s 2006 Grey Eagle gig “one of the best shows.” He recounts an Asheville story: “There was a period where I bought one wood tambourine a week, because I smashed them onstage; they always break. In Asheville, I had a new tambourine. And I have played that tambourine since then, until last week when it finally broke. A girl in Asheville, her number was actually written on the tambourine. I had plans to call that number this trip, but now the tambourine is gone. If she comes to the show, she needs to sign my new tambourine!”