Album Review: thenewno2 – You Are Here

Have you ever found yourself listening to Electric Arguments, the 2009 album by The Fireman (also known as Paul McCartney and Youth), and said to yourself, “I wonder what it would have sounded like if George Harrison had gone a similar route”? 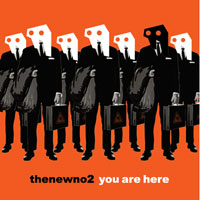 But if you were to ask such a question, the answer might be found through a listen to You Are Here, the debut album by thenewno2. That project is also a nom de rock for a duo, in this case drummer/programmer Oli Hecks and one Dhani Harrison. The music on You Are Here sounds a bit like Massive Attack, but with Dhani’s unnervingly-much-like-dad pipes out front. A winning sense of melody and upbeat arrangement keep this from falling into Radiohead territory; these guys do not have angst in their pants, so it would seem.

Highlights abound. “Give You Love” has plenty of dynamics, with a simple chord structure built around a Wurlitzer electric piano. The arrangement builds depth as the song develops. “Jokes on You” hits the ground running and features some rocking guitar from Dhani, who seems intent to develop his own style rather than ape Dad’s.”Life Off” sounds the most like something you might have heard on George’s albums (especially his final Brainwashed) but this is thoroughly original music.

Look, I’m a Beatles guy through and through. I bought Julian Lennon‘s debut album when it came out. I have and enjoy Sean Lennon‘s music (I interviewed him in 2006) and found him quite engaging in concert. I like a lot of Yoko Ono‘s work (I interviewed her too) . So I’m one of those people who bought this on the strength of the Harrison name. But the fact that I”m on my tenth or more listen in five days shows that I like the music on its merits. In general a lot of techno/trip-hop leaves me cold (though I’m a big fan of Zero 7). But on their debut album, thenewno2 turn out thoroughly modern music that’s informed by more traditional rock styles. And that’s a good thing.

P.S. If you don’t know, the duo’s moniker thenewno2 is a sly reference to the best television show in the history of the medium, the 1969 summer replacement for The Jackie Gleason Show. I’m referring of course to Patrick McGoohan‘s stunning The Prisoner.