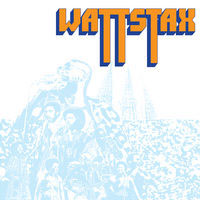 With apologies to Sir Walter Scott, “oh, what a tangled web we weave, when again we practice to re-release.” The 1972 Wattstax festival was black R&B’s excellent (if belated) answer to Woodstock and other festivals of the era. Concerts in and around the Watts district of Los Angeles put the spotlight on Stax Records’ best artists, in a dazzling show of the best the label (and genre) had to offer.

The contents of the festival have been released, repackaged, spread out among multiple released and recombined so many times that it’s all but impossible to sort out what’s what. But this new 3CD set seems to be — more than anything else — a rethinking of the most recent repackaging, 2003’s Music from the Wattstax Festival & Film. This set wisely adds in great performances that were left off that set.

For the completist, it’s anybody’s guess which or how many out of print CDs and LPs you’d have to track down, but for anyone who wants a good overview of what the Wattstax festival sounded like (and for anyone who would enjoy an excellent live compilation of the era’s best R&B — Wattstax: The Living Word is the one to buy.