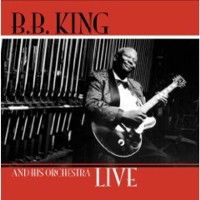 The opening sonic salvo of B.B. King Orchestra and His Orchestra Live might be jarring for longtime B.B. King listeners. A Vegasy revue number, “B.B.’s Theme” really has little to do with the master’s style of music, as instead a vampy track that serves notice that the band is tight. The toastmaster/bandleader Calvin Owens shouts over the playing (“do you feel it?”), adding to the showbizzy vibe of the track. And so it goes for eleven minutes. True, King enters part-way through and pulls things toward his style.

Things get moving in a Chigaco style after that. The instrumental showstopper “Why I Sing the Blues” features fleet-fingered guitar work and a horn section worthy of James Brown. King is comfortable enough with his position as one of the greats; he has no problem allowing plenty of space for his band members to strut their stuff. (One small complaint: the packaging doesn’t provide info on band personnel.)

It’s more than 25 minutes into this set (as presented on CD, at least) before King opens his mouth, halfway through “Sweet Little Angel.” It’s worth the wait. A sampling of King classics is rolled out, including “Everyday I Have the Blues,” “The Thrill is Gone” and “Caldonia.” On the last of these, the band really lets loose on this Louis Jordan number, doing justice to this song that illustrates the point at which blues split off into rock and roll.

The set — recorded in 1983 in France before a typical worshipful crowd — closes with “Paying the Cost to Be the Boss,” starting out sultry and smoky and building to a fitting crescendo at its end.

Not the most essential of B. B. King live releases, it’s nonetheless quite enjoyable.