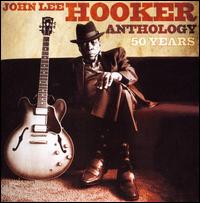 John Lee Hooker was never the smoothest of bluesmen. While he had no qualms about going electric (in fact nearly all of his celebrated work features electric guitar) he made few concessions to modern song structure. His songs — beginning with the classic “Boogie Chillen'” in 1948 — worked in the Delta blues style of his blues antecedents. His songs often extended phrases beyond what would nowadays be considered reasonable; as a result the term “endless boogie” has sometimes been applied to his work.

From the beginning of the album era (1959) to his death in 2001, Hooker released several dozen albums. As with any catalog that extensive and career that long, the quality of Hooker’s recorded work ebbed and flowed, but in general he is regarded with the utmost stature. His influence on fellow blues performers and rock musicians is beyond question; he’s been covered by artists as diverse as the Doors and the Animals. And as Anthology: 50 Years (the latest of literally dozens of Hooker retrospectives) illustrates, everybody wanted to work with the master. His most celebrated rock collaboration was with blues archivists/musicians Canned Heat on 1971’s Hooker ‘N Heat. One track from that LP is included here.

Some of the other collaborations don’t work so well. Robert Cray? Bonnie Raitt? Okay, those make some sense. But on “Chill Out (Things Gonna Change)” with Carlos Santana, Hooker’s specialness is lost in a clichéd Santana arrangement that’s been done too many times. It’s as if Hooker wasn’t part of the session, but instead showed up for an overdub (and odds are that’s exactly how it happened). And Van Morrison? This writer suspects that snoozefest was some record exec’s idea. Better on paper than on record.

In any event, it’s the first disc that makes this set worthwhile. From “Crawlin’ King Snake” to “Boom Boom” this Shout! Factory compilation works from the studio masters to present the songs in peerless fidelity (something that’s appreciated on 50-year old recordings). And the label understands the market for this sort of set: chart info and personnel info is provided wherever possible. For a novice just beginning to dip into the deep waters of the Hook’s vast catalog, 50 Years is as good a place as any to start. Just don’t get your hopes up too much about the collaborations on disc #2.