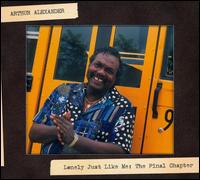 I first heard the name Arthur Alexander many years ago when listening to an interview with John Lennon; the then-former Beatles was talking about his major influences, especially some of the lesser-known ones. The Beatles covered “Anna (Go to Him)” early in their career, and performed his hit “Soldier of Love” on their BBC radio show. The Rolling Stones and Ry Cooder have also covered his songs, which are often described as “country-soul.” Alexander’s last album — 1993’s Lonely Just Like Me — is regarded as one of his best. This new re-release includes all of the original album, plus an intimate performance on NPR’s Fresh Air, some solo demos and a live cut. It’s a highly entertaining parting shot from this underappreciated and underrated artist.