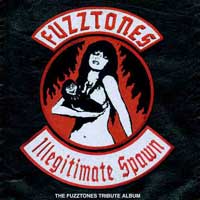 The concept of Illegitimate Spawn chases its own tail: an international compilation of unknown groups playing cover versions in tribute to The Fuzztones, a group who are themselves essentially a tribute to Nuggets-style 60s music; it’s certainly not for everyone. As an incurable addict of the melodic end of sixties fuzz-drenched garagepunk, I’m not sure I can recommend this 2CD set to casual listeners. But for those who enjoy a mean ‘n’ simple riff on the Farfisa, sneering vocals and fuzz — lots and lots of fuzz — this album is wide-ranging and essential. You have been warned.

Disc 1 kicks off with a strong organ riff on the dark and moody “This Sinister Urge” by France’s Sparkling Bombs. The Fuzz Faces (Brazil) keep things going a-go-go on “Action Speaks Louder than Words.” Through most of the set’s 40-plus songs, the vibe is kept garagey, petulant and menacing. This isn’t Cramps-style crypto-parody; these guys (and — more often that you’d guess — gals) seeming play it for real.

A few tracks stray from the basic garage concept, yielding erratic results, yet bolstering the argument that garage is an influential genre, all the while lending itself to experimentation and reinvention. “Idol Chatter” from Mad Juana (USA) sports an Eastern sound familiar to fans of Led Zeppelin and Sgt. Pepper-era George Harrison, but the vocals weaken the effect. The She Wolves’ (USA) take on “Heathen Set” mines Davie Allan territory with Pandoras-styled vocals. “Cheyenne Rider” from Belgium’s Paranoiacs sounds like it belongs on a Stooges tribute.

“Skeleton Farm” from the deliciously-named Marshmallow Overcoat made this reviewer laugh out loud with its shameless — but spot-on — recreation of The Doors. Holland’s Sonic Litter manages to pay tribute to five groups at once: their name cites two; the song choice (“Highway 69”) covers the Fuzztones; the vocals bring back Sky Saxon’s seedy, off-key wailings; and the instrumentation evokes classic MC5. Vibravoid’s “Lovely Lady Deb O’Nair” would make a great soundtrack for a biker exploitation film (should that genre ever make a comeback). The Deadbillys’ “All the Kings Horses” bring a rollicking C&W angle (emphasis here on the Western) to the proceedings. Cosmic Goblins (Finland) unearth “Rise” but do so in a (coincidental?) garage-meets-Ned’s Atomic Dustbin style.

Production values are, for the most part, what one would expect (and want) from a compilation of this sort of music. A few tracks seem to have been recorded in real studios with actual engineers and budgets (not necessarily a bad thing, but cause for suspicion). These include the swell “Fabian Lips” by USA’s Aliens & Strangers.

A complete listening will unearth a handful of really killer tracks. “Charlotte’s Remains” from Gondolieri (Argentina) is a near-perfect melding of folk-rock and spooky garage. It’s also one of only three tracks on the first disc to break the four-minute mark. The Deletones’ (Finland) cover of “Third Time’s the Charm” might be the strongest, most swaggering track on the whole compilation. On the whole, perhaps half of the forty or so songs on Illegitimate Spawn fall into the category of really great. Most of the remainder qualifies as pretty good. Only Hank Ray’s “Ghost Clinic” is painfully bad — so terrible that it merits inclusion on a mixtape of songs one might use to chase off unwanted guests. If that track weren’t present, Orange Sunshine’s “Blackout” would win the dubious prize, but it’s not quite godawful, as sloppy twin lead fuzz guitars redeem it slightly.

Listeners almost expect a bizarre album-closing track, and Illegitimate Spawn happily obliges. “Fuzztomano Piedracolas” by Peru’s Mangazoides gives us tuneless shouting en Español over a manic riff, fading away — as does the best of this genre — after a mere two minutes and fourteen seconds.

In short, listeners who would enjoy Nuggets, the Trash Box and similar comps would do well to seek out this 2CD set released on the Fuzztones’ own Sin Records (great logo, by the way).