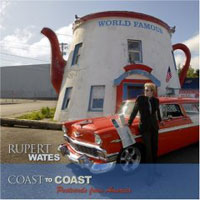 Coast to Coast is full of pleasant, NPR-circuit, inoffensive story-songs that put the focus squarely on the vocals and lyrics. The instrumentation floats by, supporting the melody but never calling attention to itself. Imagine a British Jimmy Buffett — without the Key West stoner humor — and you won’t be too far off the mark.

The songs are nice enough. The moody “Rainfall” showcases some tasty cello lines. “And the Wave Will Sing” could pass for a lost Gordon Lightfoot track. Like most of the dozen songs on Coast to Coast, it breezes by with tasteful backing.

Wates is a fine musician. His piano playing is clear and free of filigree. His acoustic guitar serves as a solid underpinning for his songs. And his slide guitar playing (see the Jackson Browne-styled “Goodbye to the Old School”) is pleasing; at times it evokes fleeting memories of George Harrison. His voice is a bit like Colin Hay (Men at Work — remember them?).

Despite the album’s subtitle, Coast to Coast isn’t really a song cycle; it’s more of a straightforward collection of songs. Some evoke the road; some, not so much. “A Friend Called Jesus” recalls the maudlin sentimentality of Harry Chapin. “(The Ballad of) Killer Weed” is uncomfortably square, but probably goes over well at the Friday night java joint.

There’s a wistfulness about many of Wates’ songs, one that suggests vivid memories. Unfortunately, an hour spent with this album won’t leave the listener with any such thing.