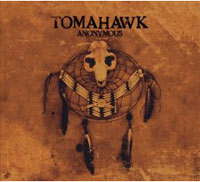 I’d call this more of a science experiment than an art project. Tomahawk’s release, Anonymous, aimed at adding an edge to cultural Native American hymns, simply ends up sounding like terrible sacrificial music. The attempt to renew the life of a genre or recognize an oft-unappreciated culture is admirable. While the concept is intriguing and original, the album itself was paining to sit through. I was half anticipating a tiny Stonehenge replica to descend from my ceiling.

The album title Anonymous refers to forgotten names in history. Apparently much research went into the creation of not only the CD, but also the notion of it. This is a band that comfortably explores different styles and ideas. In Anonymous, the band incorporates chanting, wind instruments, and rain sticks to create the feel these hymns probably had in their original format. It is possible to appreciate the unusual personality of this music. However, beyond regard for the concept-on-paper, this album is worthless. On a first listen, I was fully prepared to write a terrible review of this album. The problem is that music, ultimately, is made for listening and experiencing, not for researching in order to find value. The band members, all formerly in other groups, have musical experience and (dare I say it) talent. This skill is just paired inappropriately with a good idea.