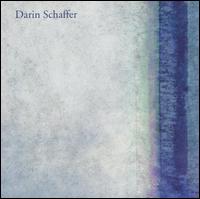 Let’s face facts: unless you, gentle reader, are trolling through this reviews section to check out what some middle aged pseudo-hipster has to say about some major release like The Flaming Lips’ At War With the Mystics (it’s friggin’ brilliant, by the way), you peruse these capsule criticisms in search of new music, and do so with two questions on your mind. One, what’s it like? Two, is it any good?

Since multi-instrumentalist Darin Schaffer’s eponymous release does not quite get the attention afforded, say, the New York Dolls’ comeback disc, a discussion of his disc requires an illuminating answer to the “what’s it like” part of the equation. The answer, as one might expect, varies depending on which track one cites. The opener, “Field” brings to mind Robert Fripp’s solo work (with its long guitar sustain); the repetitive, minimalist work of Brian Eno, Steve Reich and Philip Glass; and the acoustic fretwork of the late Malian guitarist, Ali Farka Touré. Later tracks recall the subtlety of classical guitarist John Williams.

Most tracks on Darin Schaffer build on similar ambience, and head off in different directions. There’s a distinctly eastern Mediterranean flavor (it’s hard to pin down: Turkey? Egypt?) to many of the tracks, yet the musical structure, even when it approaches stasis, is decidedly Western.

This fine album is recommended to the adventurous, including fans of any of the above-mentioned artists. Darin Schaffer’s debut sounds — more than anything else — like the way-above-average soundtrack to a way-above average film nobody’s seen.