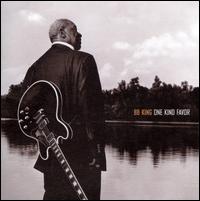 Rock and roll has generally been viewed primarily as a young man’s (well, mostly men’s’) game. Pete Townshend wrote the immortal phrase “hope I die before I get old” over 40 years ago, and he didn’t die (thank goodness). Blues, on the other hand, has been kinder to older artists. The blues boom of the 1960s resulted in many previously ignored artists finding belated fame. Those artists often collaborated with the young Turks of modern rock and blues.

Still, it was something of a surprise in 2008 to hear the latest album by B.B. King, One Kind Favor. Arranged and produced in a back-to-basics manner by renowned producer T-Bone Burnett, One Kind Favor is a pure release, a return to form. The 83-year old King covers a wide array of classic blues tunes in a style that’s at once faithful and vital. the production is free from gimmickry, and the sonic focus is squarely on the master’s vocals and guitar. Most arrangements are spare, and when horns and other flourishes appear, their presence makes sense. There’s nary a misstep on this disc. Unlike many latter-day blues releases, the album avoids the sometimes-awkward guest shots; you won’t find B.B. King singing a duet with, say, the guys from Panic At The Disco here.

King has put on weight, and he’s suffered from diabetes for years, yet he continues to tour. While his playing isn’t quite as fast as it once was (he was never about speed, anyway) he makes every note count, and his vocals have that lived-in quality fans have come to expect.

If you love the blues, get this. It’s B. B. King’s best work in years. Nothing more need be said.