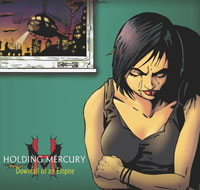 There’s a strong and proud tradition of Midwestern power pop. Cheap Trick, Material Issue, The Shoes; I could go on. The straightforward, hard-yet-melodic approach of these and groups like them has long been a characteristic of music from the region. But of course the Midwest turns out all kinds of music. So when I received a copy of Downfall of an Empire by Chicago-based Holding Mercury, I made no assumptions.

Actually, that’s not quite true. The album sat on my desk gathering dust for several weeks. The comic book (or graphic novel) styled packaging may have put me off. Perhaps I feared that the contents would be songs from another whiny emo band, or the tuneless, grating screamo sounds of the latest nu-metal act.

At some point I played the disc, and was quite pleasantly surprised. Downfall of an Empire shares much more musically with the aforementioned powerpop icons than it does with any contemporary bunch of emo/scream poseurs. The leadoff track “Stuck in a Box” features hooks, a driving beat and sweeping production that begs to be sung along with while driving at high speeds. Big guitars, clever dynamics, sweeping backing harmonies, tasteful and effective use of analog synths are all hallmarks of the first three minutes of the disc.

And Holding Mercury keeps up the pace. The ten tracks on the disc are varied enough to showcase the versatility of the group. The songs have something of an early 80s vibe–a bit like Enuff Z’nuff before they went metal. But it would do a disservice to the music to pigeonhole it as hopelessly retro.

Each of the songs has something to recommend it, but a few tracks stand out: “Standing Eight Count” has enough interesting things going on instrumentally to demand repeated listenngs; plus., it’s a fine tune. “Anchors Away” falls a bit into 80s power ballad territory, but if one manages to divorce it from that context, it’s a nice song. “No One Around (Modern Shakespearean Tragedy)” calls to mind classic Thin Lizzy, all while still sounding modern. (In fact it’s perhaps the most contemporary-sounding track on Downfall of an Empire.) Throughout the album, one finds melodic guitar solos, muscular bass playing and restrained, intelligent use of synthesizer.

The independently-released Downfall of an Empire is a worthwhile purchase for fans of big, melodic rock.