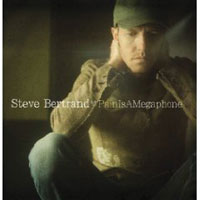 Pain is a Megaphone? On the album cover, Bertrand sulks introspectively. Maybe he’s regretting having doomed his career with such a terrible album name, or possibly he’s thinking about everything he said in track 2…or was it track 7? Released May of this year, Steve Bertrand’s debut solo album is welcomed with open arms into the world of uninteresting singer/songwriters. There’s not much differentiation from song to song. If you didn’t notice the few second pause between each track, you might not notice a song change at all. Each melody threatens to become a catchy, pop/rock ballad, (because the world doesn’t have enough of those) but not one song on the album reaches an apex. Instead, the entirety consists of every overused hook you’ve heard strung together in a way that will make you annoyed even before you’ve even had the chance to be bored with the cliché-ness of the music itself.

There are a couple of upbeat songs on the disc, but for the most part you’re doomed to listening to almost an hour’s worth of the same slow-tempo song with worn out lyrics. Musically, it’s unimpressive. He uses harmonies that caught my attention once or twice, but only for long enough for me to realize that was as much as the song was going to do. Put simply, this isn’t an album of any special worth. Thanks for spilling your guts, but I’m not sure anybody is going to be interested.