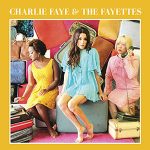 File next to: Nancy Sinatra, Dusty Springfield, Burt Bacharach Though she’s previously released two albums and an EP under her own name, Austin’s Charlie Faye has engaged in a radical makeover for her latest project. Gone are the alt-country trappings of those earlier discs, replaced by a sound that focuses squarely on sixties pop of
Read More
From a superficial standpoint, there’s not a huge amount of common stylistic ground between the music of Austin-based Akina Adderley (& the the Vintage Playboys) and Adderley’s grandfather Nat, or with her great uncle Julian “Cannonball” Adderley. But with a peerless musical pedigree such as hers, she can – no, must – be expected at
Read More