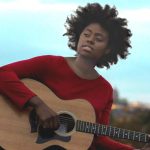 Victory Boyd was “discovered” busking Stevie Wonder songs on the streets and in the subway stations of New York City, and that discovery led to a recording contract not only for her, but for her entire family including her father and eight siblings. The singer-songwriter was a featured performer at the fourth annual LEAF Downtown
Read More