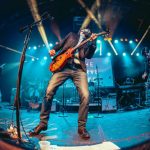 The Verve Pipe got its start in Lansing, Michigan in the early 1990s. Led by singer-guitarist Brian Vander Ark, the group got its first big break when RCA signed the band to a multi-album deal. The Verve Pipe’s first RCA album, Villains, went platinum (one million units sold) and spawned four Top 40 hits on
Read More 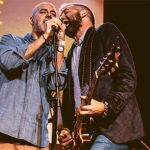 For those of you who observe and/or celebrate the holiday, Merry Christmas! Here’s my gift to you. Oftentimes when I do an interview, worthwhile content doesn’t find its way into the finished story. Space considerations often dictate that; other times, we go off on a tangent that – while very interesting – doesn’t fit neatly
Read More
This set of five 100-word reviews focuses on new music, some of which is from familiar names; others might be new to you. All are worthwhile and enthusiastically recommended. Murali Coryell – Restless Mind This son of legendary fusion guitarist Larry Coryell is charting a musical path quite different from his dad: he plays tasty
Read More