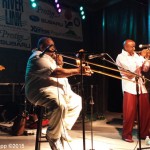 I’m always amazed and grateful that despite being a comparatively small market, Asheville draws high-end touring talent. 2015 was no exception. Among a long list of local shows, these are […]
Read More 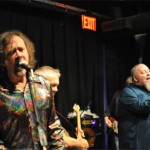 Pugwash haven’t become a household word in the United States, but it’s not for lack of effort. With their winning melodies, sharp hooks and winsome lyrics, the Dublin, Ireland-based group […]
Read More
Continued from Part Two… Unlike their earlier deals with other labels, Pugwash‘s recent A Rose in a Garden of Weeds is not a one-off licensing deal. “Omnivore is our label,” […]
Read More
Continued from Part One… Some listeners might peg the music of Pugwash as “retro,” though in reality it’s classic pop in the best sense of the word. Many reviewers have […]
Read More
Irish band Pugwash has been around for fifteen years, and during that time, leader and songwriter Thomas Walsh has worked with a long list of people whose names will be […]
Read More