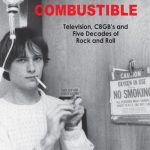 Discorporate and We’ll Begin. Everything is Combustible is not your run-of-the-mill rock memoir. But then Richard Lloyd is nobody’s idea of a run-of-the-mill rock musician. As a founding member and leading light of Television, Lloyd was at the front edge of New York City’s music scene in the late 1970s. And Everything is Combustible addresses
Read More
After getting (respectively) a headache and a power nap, my sweetheart and I headed back to the Tennessee Theatre, remarking all the while how well-thought-out Big Ears 2014 is as a whole. The four primary venues all lay in a straight line in downtown, the farthest apart being no more than about six blocks. And
Read More