Among King Crimson fans, 1970’s album Lizard is a misunderstood release, and ranks among the least-popular of the group’s albums. That’s a shame, as Lizard is effective and groundbreaking in its own ways. King Crimson leader Robert Fripp was convinced by no less a fan than Porcupine Tree’s Steven Wilson that Lizard is deserving of
Read More 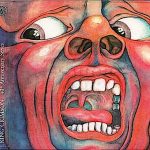 There was little precedent for the music on King Crimson‘s 1969 debut album. Titled In the Court of the Crimson King — An Observation by King Crimson, the album gave a clear signal that something had changed in the world of music. In 1969 rock and popular music were in the midst of a fertile
Read More
From the first ominous, jagged chord of “Red”, the opening track on the 1974 King Crimson album of the same name, listeners know they’re in for a bracing, uncompromising experience. The song is now widely accepted as an exemplar of instrumental progressive rock. The song’s high-wire act balances brutal riffs (modern day listeners, think of
Read More
Live in New York City is the first live offering from Blackfield, the collaborative effort between England’s Steven Wilson and Israeli Aviv Geffen. With two albums in their back catalogue (2005’s self-titled album and 2007’s Blackfield II) the time was right to release this concert album, recorded around the time of Blackfield II‘s release. The
Read More
The 2008 reissue of Lightbulb Sun makes one of the rarest parts of the Porcupine Tree catalog readily available again. The group’s seventh album of studio material, Lightbulb Sun was originally released in 2000. Release was originally scheduled for 2007, in fact, as Steven Wilson told me during an interview. Porcupine Tree were selling Lightbulb
Read More