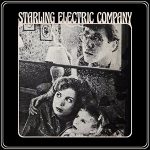 File next to: Pete Yorn, Bob Pollard, Bob Mould In 2008, Michigan’s Starling Electric released Clouded Staircase, one of the best albums of that decade, and one that almost nobody […]
Read More