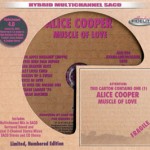 Dedicated fans of 1970s rock know that Alice Cooper means two different things: there’s the vocalist born Vincent Furnier, and there’s the group he fronted from the late 1960s (when […]
Read More
In 1968, the concept of a “supergroup” was still fresh; Lillian Roxon even wrote about it – and its possibilities – in her Rock Encyclopedia. Al Kooper devised what became […]
Read More
From a demographics perspective, I suppose I am the target market for releases such as these. How else to explain compilations that have no thematic or time-period cohesiveness? Legends Get […]
Read More
Some people — musicians, listeners, you name it — get their nose out of joint when writers apply labels to music. How dare we, the thinking goes. The music shouldn’t […]
Read More
On the occasion of its 2014 reissue on Hybrid SACD, Alice Cooper’s Billion Dollar Babies is due for a critical second-look. Originally released in 1973, Billion Dollar Babies was Cooper’s […]
Read More