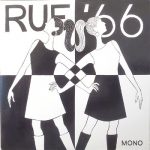 I’ve written now and then (here and here, for example) about French pop of the 1960s. The so-called yé-yé movement, and the charming if slightly odd insularity that characterized the scene. True, the French of that era didn’t pay a lot of attention to what was going on musically outside of their country, preferring home-grown
Read More