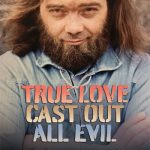 Though he left this dimension a few years ago, Roky Erickson continues to fascinate and inspire. I was fortunate enough to see him more than a decade ago onstage at […]
Read More

The Bay Area’s rich psychedelic music tradition has its roots in familiar places: Jefferson Airplane, Big Brother and the Holding Company and The Grateful Dead laid the groundwork and built […]
Read More
Austin-based band Black Angels have a finely tuned sense of history. While their music – often described by the band members themselves as “tribal psychedelic” – doesn’t aim to slavishly […]
Read More