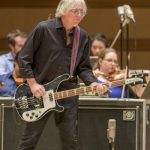 I grew up just outside of Atlanta, Georgia, so when R.E.M. got together in the nearby college town of Athens and started making noises in 1980, my friends and I thought of them as a local group. We followed with interest their rise in popularity; I recall an episode a few months before the release
Read More
If you’re at all like me, and fondly remember the days when albums came jam-packed with an assortment of goodies, you may appreciate the new 25th Anniversary deluxe reissue of R.E.M.‘s Green. I bought the vinyl album on release back in the the 80s, and while it’s not my favorite of their records (that honor
Read More