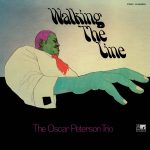 Recorded in MPS Records’ Villingen, Germany studio over four days in November 1969 (and released the next year), Walking the Line features pianist Oscar Peterson joined by bassist Jiri Mraz […]
Read More
So here we are. It’s the last day of 2014. And it’s also the final day of posts looking back at my personal Best of 2014 lists. Today I’ll run […]
Read More
Oscar Peterson was one of the most beloved figures in jazz. His recording career began in 1945, got fully underway in the 1950s, and tapered off as his health declined […]
Read More
This time ’round in my capsule reviews, I take quick looks at five new reissues from Concord’s Original Jazz Classics series. All five were originally issued on Norman Granz’ Pablo […]
Read More