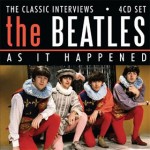 Today features hundred word reviews of archival and reissue releases from American and overseas labels. The Brecker Brothers – The Bottom Line Archive This is the latest from the new series of releases documenting soundboard recordings from one of New York’s most famed nightclubs. The label’s web site claims the archive contains over a thousand
Read More
More quickie reviews today. Some familiar names, some not-so-well-known ones. All worth a spin. John Wetton – New York Minute This disc – recorded live at New York City’s Iridium in fall 2013 – has an odd, busman’s holiday quality about it. Though Wetton is pictured with a guitar, on the record he’s just singing.
Read More
With exceedingly few exceptions, progressive rock is a man’s game. There’s certainly no law against women singing or playing in the style – Julie Slick, for example, is one of the best bassists around these days, irrespective of genre and gender – but the truth is that the progressive rock scene is one in which
Read More
I’m on my honeymoon this week, so I thought it would be a good time to offer up some backlog-clearing entries in my occasional series of Hundred Word Reviews. And though the musical styles are all over the map, there’s a theme of sorts this time: each of the acts reviewed has been covered previously,
Read More