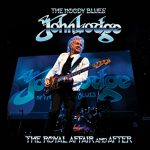 The Moody Blues are beloved among their fans. Their initial run of albums is as consistent a colleciton of releases as you’ll find in the rock canon; each has hits, excellent deep album cuts and a cohesive character. The group went on hiatus for awhile after Octave, and when they returned in the MTV era,
Read More