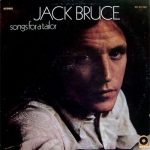 Sixties supergroup Cream had at least five things that made it special: guitarist Eric Clapton, drummer Ginger Baker and bassist-vocalist Jack Bruce were the three most obvious assets. But producer Felix Pappalardi and Bruce’s lyricist Pete Brown deserve major credit as well. For all of Cream’s excesses onstage – seemingly endless guitar soloing and “Toad”
Read More
Over the last nine business days, I’ve surveyed 45 albums of new, reissued, and/or archival music from a wide array of artists in jazz, prog, soul, rock and other genres. Each review has been exactly 100 words. Today I wrap up that series of capsule reviews with a quick look at five video releases. Jack
Read More
Let us consider for a few moments the current conditions of the three musicians formerly of Cream. Drummer Ginger Baker has made a career out of being disagreeable (see the film Beware of Mr Baker for proof). Guitarist Eric Clapton still tours, records and performs, but the fire has seemingly long ago gone out. But
Read More