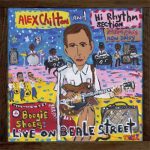 If there’s such a thing as an obscure legend, Alex Chilton is one. While he was in fact the lead singer in a popular ‘60s pop group (Box Tops) and part of supremely influential Memphis band Big Star, his name isn’t one that’s familiar to the casual music listener. And even among those who appreciate
Read More
Preconceptions can be a dangerous thing. When I read the advances of Dave Keller‘s Soul Changes, I made the assumption that Keller would be the latest vocalist in a Memphis-flavored retro bag. And while he is in fact that, he’s much more. Taking nothing away from the fine singers who don’t play an instrument onstage
Read More