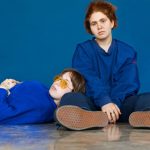 Los Angeles-based band Girlpool started out in 2013 with a stripped-down, clattering style that echoed Violent Femmes. But as the band has grown and developed, it has moved in two opposite directions at once: the group’s recordings have become more soothing and melodic (think Elliott Smith), and today, its onstage vibe often leans toward a
Read More