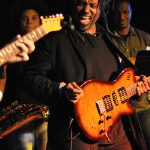 “I started Project/Object around 1989 or ’90,” says guitarist André Cholmondeley, leader of the popular Frank Zappa tribute group. “I thought, ‘Yeah, we’ll do this for fun. We’ll do it once a year on Frank’s birthday.’ But I never had the concept that it would be a group involving musicians who had played in Frank
Read More