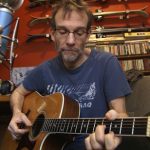 In an unprecedented burst of creativity, New York City musician Brian MacWilliams wrote some 300 songs in the space of just a few years. Midway through that streak, he was diagnosed with ALS (Amyotrophic lateral sclerosis, often known as Lou Gehrig’s disease). But a community of friends and supporters – in New York, Asheville and
Read More