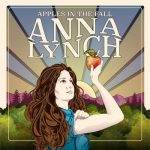 Singer-songwriter Anna Lynch is originally from Sebastopol, California; she led bands in Alaska before settling in Western North Carolina. Her self-titled debut album was released in 2013, and now Lynch has followed up that well-received set with a new five-song EP, Apples in the Fall. Lynch’s debut from six and a half years ago displayed
Read More