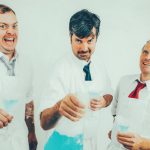 Winner of the 1999 National Medal of Technology and Innovation, technology futurist Ray Kurzweil has some controversial – and inspiring – ideas. Kurzweil is an outspoken theorist who believes that before this century is over, Earth will see development of a hybrid human-machine civilization. In popular entertainment, that idea can be taken in several directions;
Read More