This week, I’m quite busy attending Moogfest 2014 here in Asheville NC, the adopted of hometown of both myself and the late Dr. R.A. Moog, for whom the five day event is named. I hope and plan to bring extensive coverage to this blog very soon. In the meantime, here are some shorter-than-usual reviews. Please
Read More
There’s little doubt that AC Entertainment are some serious heavy hitters when it comes to the organization and execution of festivals. While the long-running Bonnaroo is the biggest and best example, and the just-announced-as-defunct Mountain Oasis Festival (itself a sort of ersatz Moogfest, which itself had long been an AC event) was a wonderful event
Read More
In October 2013 I covered the three-night Mountain Oasis Electronic Music Summit in Asheville NC. Here’s a summary of relevant pieces on the Musoscribe blog, with links. Preview Review: Night #1 Photos: Night #1 Review: Night #2 Photos: Night #2 Review: Night #3 Photos: Night #3 See ya next year. Meanwhile, you might enjoy my
Read More
The third and final night of the Mountain Oasis Electronic Music Summit featured a host of names with which I was largely unfamiliar. So I took the opportunity to pop into several shows in hopes of finding something that struck my fancy. I was intermittently successful. Darkside Seemingly having ingested a steady diet of Wish
Read More
The history of the new Mountain Oasis Electronic Music Summit is a bit knotty. Quick capsule back-story: synthesizer pioneer R.A. Moog passed away in August 2005. As a way to honor his myriad innovations, a small festival called Moogfest was put together in New York City in the year before his passing. That small festival
Read More
Coming this Friday (September 20, 2013) to Asheville NC’s Orange Peel: Los Angeles-based band Superhumanoids, opening for Mayer Hawthorne. The trio’s sound owes a stylistic debt to 80s synth-centric pop, most notably Berlin (the airy vocals of Sarah Chernoff, one of the group’s two singers), Depeche Mode (via the synth bass and drum machines) and
Read More
Asheville, North Carolina is host to more festivals than one might expect of a city its size. This cultural magnet nestled among the Blue Ridge Mountains in the Western part of the state has a population of about 70,000 (more if you count the outlying areas, but it’s still modestly-sized), but the city is home
Read More
Continued from Part One Clare & the Reasons do have a signature sound, but they’re not tethered to a specific musical approach, and don’t like to repeat themselves. Leader Clare Muldaur-Manchon describes the upcoming album KR-51 as “quite a bit darker, quite a bit more raw and honest” than the group’s previous efforts (2007’s The
Read More 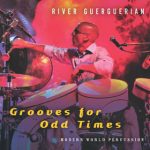 If you’ve ever witnessed or experienced it, you’ll remember. You’re in a church of some sort – or maybe it’s a community campfire gathering. Whatever: the musical accompaniment launches into something with a bit of folk or what they used to call “negro spiritual” in it. Something with a beat. People moved by the spirit
Read More
As usual, I attended quite a few live shows this year. Picking the best was difficult, and in all likelihood it’s a mood-based decision: no doubt if I make this list again a week from now, it will be different. But here goes. The Church – Despite what I wrote above, this one would remain
Read More