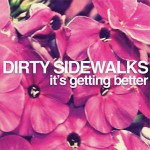 Seattle-based Dirty Sidewalks recently released a 7” single worthy of a listen. The a-side, “It’s Getting Better,” has already gotten some commercial traction in one of the few forms that actually generates income for the artist: TV and/or film placement. Twenty-odd seconds of “Getting Better” played during Episode 11 of Season 6 on Showtime’s Shameless.
Read More
File Next to: My Bloody Valentine, Best Coast There’s a curious quality to some of the best shoegaze: the dual feeling of moving both at breakneck speed and at a glacial pace. The music on More Faithful, No Joy’s third long player, is a case in point. From the opening notes of kickoff track “Remember
Read More
One of the many pleasures associated with living in the small mountain city of Asheville NC is access to great live music. I grew up in the 70s and 80s in Atlanta, where going to a concert often meant traveling to a sports arena, and watching the tiny performers from the nosebleed seats (where you’d
Read More
Continued from Part One… The first record was self-produced; for Glow & Behold, the band chose to work with Chris Coady, who’s worked with other indie-styled artists like Smith Westerns, Wavves and Beach House. Max Bloom says that the “brightness” of Coady’s sound works well with the songs on this album. “I’m used to doing
Read More
In October 2013, London/New York-based Yuck released Glow & Behold, their second album. And while a “cold” listen to it – as in, using ears that had never heard their self-titled 2011 debut – led to me naming it as one of the year’s best releases, some fans don’t agree. They remind me of the
Read More
For many years now, it’s been a shortcut to hip/trendiness (for some, at least) to claim that your group sounds like the Velvet Underground. But merely echoing some of the sonic signatures of another group doesn’t guarantee any particular level of quality. The vibe, so to speak, is far more important. And so it is
Read More