Devo’s Gerald Casale is Still Not Through Being Cool 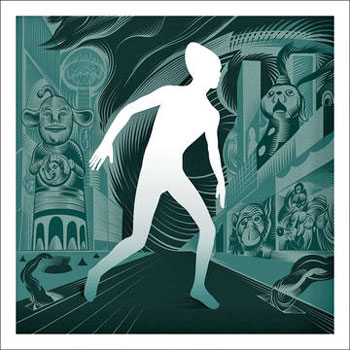 Gerald V. Casale is a founding member of conceptual rock band Devo. In addition to writing and/or co-writing a great deal of that band’s music with fellow founding member Mark Mothersbaugh, Casale is the group’s primary lyricist. And now Casale has made the latest of his comparatively rare forays beyond the Devo framework to release a solo EP, The Invisible Man. A video for the title track was released in mid-November, and a vinyl EP (a clear “invisible” pressing) was released on Black Friday.

Featuring instrumental support from Josh Freese (Nine Inch Nails, Guns N’ Roses) and Oingo Boingo guitarist Steve Bartek, The Invisible Man displays the twin characteristics that form the core of Casale’s work with Devo: tunefulness and weirdness. And Casale’s status as a pioneering video director is reinforced by the video for the EP’s title track. It’s a heady, mindwarping trip through Casale’s playful subconscious. And you can dance to it, too.

Some artists think of video as a supplement to the music. Casale – who has directed music videos for The Cars, Foo Fighters, Rush, Soundgarden and many others – takes a more creatively unified view. And he always has. “I can’t think about [music and video] separately,” he explains. “Devo was a conscious multimedia concept; I was thinking about it as a hybrid form from the beginning, before there was MTV, and before we had done our first film.”

The 74-year-old Casale is a straightforward and engaging interview subject, but he often speaks in metaphors. So it was when asked how the music on The Invisible Man differs in character from Devo, the group with which he wrote and recorded hits like “Whip It.”

“It’d be like 6 cylinders out of 12 in a Ferrari V12,” the left-handed bassist suggests. “I can only be me and do what I do.” He points out that while Mark Mothersbaugh is a formally trained musician, he’s largely self-taught. “I couldn’t play jazz keyboards,” Casale admits with a chuckle. “But I [am] very interested in song structure, composition and arrangements.”

And those interests are in full flower on “The Invisible Man.” With a lyric that exists in the space between weirdly impressionistic, nonsensical and astutely observational, the tune has a deep and inviting groove that should resonate with Devo fans raised on “Through Being Cool,” “Beautiful World” and other classics from the pride of Akron, Ohio.

Working with Freese and Bartek, Casale creates music that has that off-kilter Devo feel, but with its own personality. Freese has worked in a wide variety of styles, and has been a member of Devo since 1996 when the group ended a five-year hiatus. “He’s the Zelig of drummers.” Casale says, referring to the fictional cinematic character who excels at blending in with whatever surrounding he encounters. “One week he’s with the Vandals, then he’s doing Nine Inch Nails and A Perfect Circle. He morphs into ‘that guy,’” Casale says. “Y’know, ‘Here’s Mr. Prog Rock!’”

Guitarist Bartek came “late to this collaboration,” Casale says. But Bartek made his presence known, adding his distinctive and somewhat unconventional instrumental flavors to the recordings. “He’s got a warehouse of guitars and effects,” Casale says. “He’s a scientist!”

Owing to the restrictions necessitated by the pandemic, the EP’s versions of “I’m Gonna Pay You Back” were recorded the new-fashioned way: the musicians emailed audio files back and forth, creating the finished track by combining performances recorded at their various home studios. Casale describes the disembodied process as “creepy. But for ‘The Invisible Man,’ we were all in the same room.”

Restlessly creative, Casale nonetheless combines his artistic vision with what might even be called a commercial sensibility. (How else to explain the mainstream success of something as weird as Devo’s cover of the Rolling Stones’ “(I Can’t Get No) Satisfaction”?) When he’s writing songs or creating music videos, Casale believes that he’s effectively “solving problems.”

Casale says that he realized long ago that “with any recording artist who creates something from nothing, you’re making something up that you thought of. And the world doesn’t even know they want it at that point.” In fact, they may not, he admits with a chuckle.

But if an artist is lucky, Casale believes, creativity and timing will line up to deliver success. He provides an example to illustrate his point. “If you would’ve played the Jimi Hendrix debut album Are You Experienced? for a focus group six months before it was released, everybody would’ve gone, ‘What the f**k is that?’ But once they heard it, they just kept putting it on the turntable over and over and over,” Casale says. “They couldn’t remember the time they didn’t want it. And that’s a recording artist.” Timing isn’t everything, but it’s important.

And Casale clearly believes that now is the time for a solo release. With Devo, he has created nine studio albums, 10 live albums, nine video albums and more than two dozen singles. And while Devo continues to tour, all evidence suggests that the band no longer focuses on releasing new material.

Gerald Casale, on the other hand, continues to write music. Using the alias Jihad Jerry & the Evildoers, he released an album, 2006’s Mine is Not a Holy War. In 2008 he collaborated with Czech “robo-pop” band Die Alten Maschinen on a single, “To Be or Not.” 2016 saw the release of “It’s All Devo!” a joint project featuring Casale and Italian house/techno duo Phunk Investigation.

And in 2021, Casale released a limited-edition, three-song 7” record dedicated to his brother. Bob Casale was also a founding member of Devo, and passed away in 2014. The lead-off track on that now-rare record is “I’m Gonna Pay You Back.” Its inclusion on the new The Invisible Man EP makes it easier to acquire.

The prospect of seeing and hearing Gerald Casale live onstage is a distinct possibility as well. “Between the new [songs] that we haven’t got to record yet, the ones you have heard recently, and some of the songs off the original Jihad Jerry & the Evildoers solo record, I have enough songs,” he says. “I have a good 40-minute set that won’t leave them bored at all.”