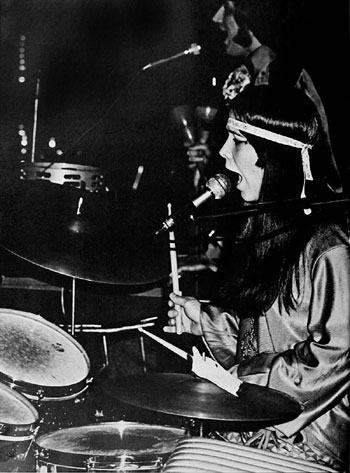 Crouch got her start as a drummer while in ninth grade at Hendersonville High School; the band director recruited her to the school band. “I didn’t get a kit until 11th grade,” she says. Crouch bought the kit from a guy who was getting married and needed the cash. “This was 1966,” she says with a laugh. “So 50 bucks went a long way.”

Theresa worked hard to develop her drumming skills, and people noticed. Before long, Terry Justus’ mother encouraged her son to let “the little Crouch girl” audition for his band. Crouch’s debut with Orange Purple Marmalade was at a Hendersonville sock hop in 1967. In short order, gigs became plentiful for the tight, accomplished band. Not yet the legal age to play bars, the group had no shortage of gigs in front of younger audiences at scout cabins and teenage canteens.

The band developed an extensive repertoire, with enough songs for three sets per night. “We’d do a whole set [of cover songs],” Theresa says, “and then for the second set we’d play all originals.” After a break, Orange Purple Marmalade would return for a third set. “We’d end that up with a drum solo,” she recalls with pride.

Theresa and her band mates had some sense of being part of a larger musical movement, but they didn’t get too philosophical about it. For her it was mostly about “playing good music and playing to a good fan base.” One of Orange Purple Marmalade’s highest-profile local shows was in summer 1969, an opening slot at the Asheville City Auditorium (now the Thomas Wolfe Auditorium). “That was the biggest crowd I believe I’d ever seen,” Crouch says. After she took a lead vocal turn, a fan approached the stage and handed her a rose. “I about fell to my knees,” Theresa says.

Orange Purple Marmalade secured management and embarked on a tour. Crouch vividly recalls a gig in Portland, Maine. “During the drum solo on ‘In-A-Gadda-Da-Vida,’ I moved the stool and fell off the back of the stage!” Unfazed, she quickly jumped back onstage, and called out to her band mates: “Let’s take it from the organ solo: 1, 2, 3…”

The band entered Galaxie III Studios in Taylorsville, N.C. sometime in 1969, recording basic tracks for a pair of songs written by rhythm guitarist Bobby Pruitt. But in a sequence of events common to the music industry of that era, when the record came out, the band’s name was nowhere to be seen on the label. “I don’t know the story on that whole shebang,” says Theresa.

But music historian Vance Pollock knows. “The band was playing a string of beach clubs in New England, so they were out of the loop,” he explains. “Producer Dave Smith decided that their song ‘Pink and Green’ would be the next single on his Bandit label.” With Orange Purple Marmalade unavailable for vocal overdubs, Smith instead brought in a Weaverville singer, teenager Shirley Hughey. The record went out with her name on the label; Theresa and her band mates didn’t learn of all of this until much later. “It was kind of a shady deal,” Pollock admits. Today, used copies of the rare 45 change hands for an average of $300.

The band eventually changed its name to Justice, altered its style and went on to a successful career touring the Eastern seaboard through the 1970s and beyond. Terry Justus passed away in 2010; Theresa still owns her big drum kit.