It Came from Asheville! WNC Garage Rock in the ’60s, Part Three: The Ron-De-Voos

Trip of the imagination

Music historians trace the origins of psychedelic folk (or “freak folk”) back to 1964, when The Holy Modal Rounders gigged around New York City’s Lower East Side and Greenwich Village. But guitarist Mike Baker – then a 13 year old student at Asheville’s Hall Fletcher Junior High – wouldn’t have known anything about all that. Like untold numbers of other youths, Baker’s musical epiphany happened on the evening of Sunday, February 9, 1964 when he (and an estimated nearly 74 million other Americans) sat transfixed in front of the television watching the Beatles on The Ed Sullivan Show.

Thus inspired, Baker acquired and learned to play a guitar. By the time he was 15, he was accomplished enough to form a group, The Ron-De-Voos. “That was the 1965-66 wave of garage bands,” he recalls. “There were already some [local] musicians who were two, three years older than us, like The Wunz. They had already made their mark; we were part of the second wave of groups.” 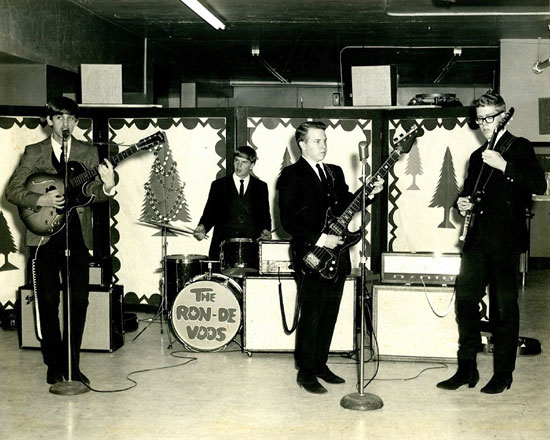 And he was writing songs, too. Baker’s imagination served him well as he composed “Trip So Wild,” a first-person tale of a young man struggling with heroin addiction. “I wanted to write a serious song,” he says, noting that to this day he has never used illicit drugs. “By the act of imagination, I came up with the idea of a journey into the heart of darkness.”

More than a half century later, the 1967 song’s inspiration remains a mystery, even to its composer. “How I came up with that at the age of 15, I couldn’t tell you,” Baker says with a laugh.

Most of The Ron-De-Voos’ material was considerably more upbeat than the spooky, forlorn psych-folk of “Trip So Wild.” Baker says that his group “made ourselves experts in Dave Clark Five songs.” He says that the group was part of “an energetic, exuberant [local] scene. We played at any kind of gathering that needed a group.”

In fact Baker’s song was one of only a small handful of original tunes. “Local bands were cover bands,” he explains. “It was more important to us to get that song list fine-tuned, and find gigs to play.” But his band mates were receptive when their guitarist brought in the self-penned composition. “They loved it,” Baker says. “So we decided to go for it, and we found that little label, Mastertone.”

The band never cut another single, and Baker eventually went on to another more successful local band, The Looking Glass. But The Ron-De-Voos’ lone A-side hasn’t disappeared into total obscurity. When renowned music historian Richie Unterberger published his 2003 history of folk rock, Eight Miles High, he praised the song as a “despondent gem of morose acid damage, with its arresting minor-key melody, drumless guitar-bass busk, and visions-of-spiders-crawling-on-the-wall vocal.”
On its original release, few if anyone outside of Asheville heard the song. As Unterberger asks rhetorically, “Could anyone have reasonably expected it to have gotten played on AM radio even once, let alone become a hit?”

For their part, the four musicians in the Ron-De-Voos may have harbored some hopes of stardom, but Baker says that for the most part he was “grounded in the fact that we were amateurs.” Wistfully pausing a beat, he adds, “But thinking back, I guess any kid would dream, wouldn’t he?”