It Came from Asheville! WNC Garage Rock in the ’60s, Part One: Introduction 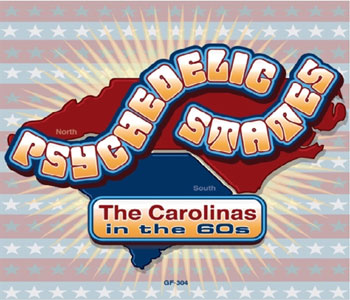 The garage rock movement of the mid 1960s yielded a bumper crop of rock and roll bands. Inspired by British Invasion groups like the Beatles, the Rolling Stones, Yardbirds, Kinks, Who and Animals, teenagers across the U.S. picked up electric guitars, basses, drums and combo organs, forming bands of their own. Even though most covered the music of their heroes, a remarkable number of those groups had a good original song or two in them, and a surprising number of them found record labels willing to record and release that music.

Back in the ‘60s, few of those records were released on major labels, and fewer still made any commercial impact outside of the respective bands’ hometowns. Yet more than fifty years later, music fanatics treasure the innocence and spirit captured in those (often low-fidelity) recordings. A pair of North Carolina-based music historians have curated the new 3CD release. Featuring 80 songs from as many rock combos, the 25th in Gear Fab Records’ ongoing series digs deep into the world of that era’s garage rock scene.

The Carolinas of the 1960s were known as the home of beach music. But Asheville-based musicologist/deejay Vance Pollock emphasizes that the harder-edged sounds of garage rock were happening right under the noses of the shag-dancing masses. And the collection he has co-curated reflects that, focusing specifically on “bands who intentionally didn’t play ‘My Girl’ or ‘Hey Baby,’” he says. And to aficionados of the music, the amateurishness of these bands was a feature, not a bug. “What they lacked in expertise, they gained in verve and passion,” says Chapel Hill writer/archivist and project co-curator Ken Friedman.

The garage rock movement had an openness about it, a characteristic that connects it with punk of the ‘70s. “There was a low bar,” Friedman asserts. “You didn’t have to be the Beatles; you didn’t have to be that expert. You could get out there and create a record.” Playing in a band was often the teenage musicians’ ticket to social importance and popularity. And it was just plain fun.

Pollock was pleased to team up with Friedman for the project. “Ken put out the first Carolina collection of garage records,” he says, referring to the classic 18-track vinyl collection Tobacco A-Go Go, released in 1984. That would be followed by additional volumes. “But we jointly made the decision not to regurgitate [those compilations] for the new series,” Friedman says. “It just seemed cheap to use them again.” Only four or five cuts from those records are found on the new collection.

Bands from all over the Carolinas are featured on the new set. Some are legendary if only for their names: “Huckleberry Mudflap is the name for a psychedelic group,” Pollock says with a laugh. Chapel Hill band Arrogance, on the other hand, has its own Wikipedia page; that group featured future R.E.M. producer Don Dixon. And several of the groups whose work is preserved on Psychedelic States: The Carolinas in the 60s are from Western North Carolina: the Shadows came from Haywood County; the Jesters were out of Marion.

While the liner notes (penned by Friedman with contributions from Pollock) are extensive, little is known about bands like Hendersonville’s Gary & the Eastmen, and Pollock lost touch with former members of Asheville’s own Electric Love many years ago. But members of at least three bands featured on the new archival collection – The (Fabulous) Wunz, The Ron-De-Voos and Orange Purple Marmalade – still hold fond and vivid memories of the music they made more than a half century ago.

Click the links below for stories and photos on each.