It’s beginning to look a lot like Christmas (Jam), Part 1 of 3 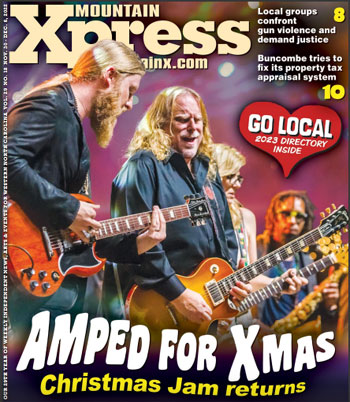 Note: My cover story in the Nov. 30 issue of Asheville, N.C. altweekly Mountain Xpress explored the beginnings and development of the long-running Warren Haynes Presents Christmas Jam, which made its return after a three-year absence.

As an Asheville-based music journalist, I’ve been fortunate to interview Warren Haynes on many occasions. The first was for a 2016 cover story/profile in WNC Magazine; the second was for stories in Atlanta and Tampa altweeklies, during his “Last Waltz 40” commemorative tour in 2017. We spoke again (for a Mountain Xpress story) ahead of the 30th Christmas Jam in 2018, and then in 2019 for Metro Silicon Valley, discussing the latest Gov’t Mule album release. He’s always a forthright and engaging interviewee, so I looked forward to our recent chat.

Today, Asheville-born Haynes is a household name in the music world. But back in the early ‘70s, Haynes was merely a gifted and hard-working local guitar player hoping to find success in a competitive music scene.

Even then, he was part of Asheville’s closely-knit local community of musicians. Close friend, fellow guitarist and former bandmate Mike Barnes has known Haynes since childhood. They took part in informal musical get-togethers long before even the first official Jam. “We’d always get together and jam around Christmastime,” Barnes recalls, “either at my house or [drummer] Chipper Lunsford’s house.”

The rest of the time, local musicians played at one of several North Asheville music spots. With a lighted dance floor and mirrored walls, the Cosmic Ballroom was one of Asheville’s hippest night spots. It was situated in the space occupied today by Rye Not, under the now-abandoned Stein Mart (then Rose’s). The bands that Barnes and Haynes led in the mid- and later ‘70s – Blue Sky, then Total Eclipse – played there often. They also landed frequent gigs at the Brass Tap (at the northeast corner of Merrimon Avenue and Edgewood Road) and Doc’s Rock Shop (today the parking lot of the North Asheville Ingles). Looking back, it’s remarkable to realize that the Asheville of those days – with a population one-quarter of what it is now – could support so many live rock venues.

In 1988, the embryonic Christmas Jam got its official start at 45 Cherry. And as Haynes’ career blossomed, the local music scene continued to change and grow. Live music moved from North Asheville to downtown. Be Here Now – the Jam’s second long-term home – was a center of activity. Other venues opened; today Vincent’s Ear, Gatsby’s, Stella Blue, Asheville Music Zone, The Garage, New Mountain, The Mothlight, Ambrose West and The Altamont are all the stuff of local musical legend.

And the local music scene continues to thrive. Whether it’s touring acts playing at the Civic Center or Thomas Wolfe Auditorium or artists playing whispered-about sets at West Asheville house concerts, live music in Asheville remains alive and well in 2022. And with the return of Warren Haynes Presents Christmas Jam, one of Asheville’s favorite sons is doing what he’s done for more than three decades: bringing it all back home again.

A thirty-year streak ended when the annual Warren Haynes Presents Christmas Jam was canceled in 2019. And a global pandemic meant that the all-star concert fundraising event wouldn’t happen in 2020 or 2021, either. But now the wildly popular event (advance tickets sold out in minutes) returns to Harrah’s Cherokee Center. With a bill that includes Phil Lesh & Friends, Tyler Childers, Gov’t Mule, Brothers Osborne, Dinosaur Jr. and more, the 31st Jam happened December 10.

Early Jams
The annual event – today branded as Warren Haynes Presents Christmas Jam – sprang from humble beginnings in 1988. But even at its start, when it was billed as “The Christmas Jam: Musician’s X-Mas Reunion,” the gathering combined having a good time with trying to do good. “It started in a small club, 45 Cherry,” Haynes recalls. (Today the site of the long-shuttered venue is a parking lot just north of the Asheville Skatepark).

The concert was an opportunity for Asheville-based musicians to get together informally during the one time of the year when they weren’t busy with live dates and/or tours. Haynes doesn’t recall what the ticket price was. “Probably $6 or something,” he says with a laugh.